The Congress of Clowns Hey, this photo is ©

The Congress of Clowns

Today I bring you a bit of my own history, a picture I took back in 2011, a month before the Spanish general elections won by Mariano Rajoy, I believe that by the time I wrote these lines the situation would be a little bit different if I wanted to take the same picture, we would probably spend the night in jail!

Well, this was the time when explicit and straight forward images popped up in my mind, this was one more way of express my thoughts about society, more about the political situation and how a complete circus politics have become. The result of this photo session was intended to be part of the Hipoxia Project, but after all it didn’t really fit with the rest of the work. 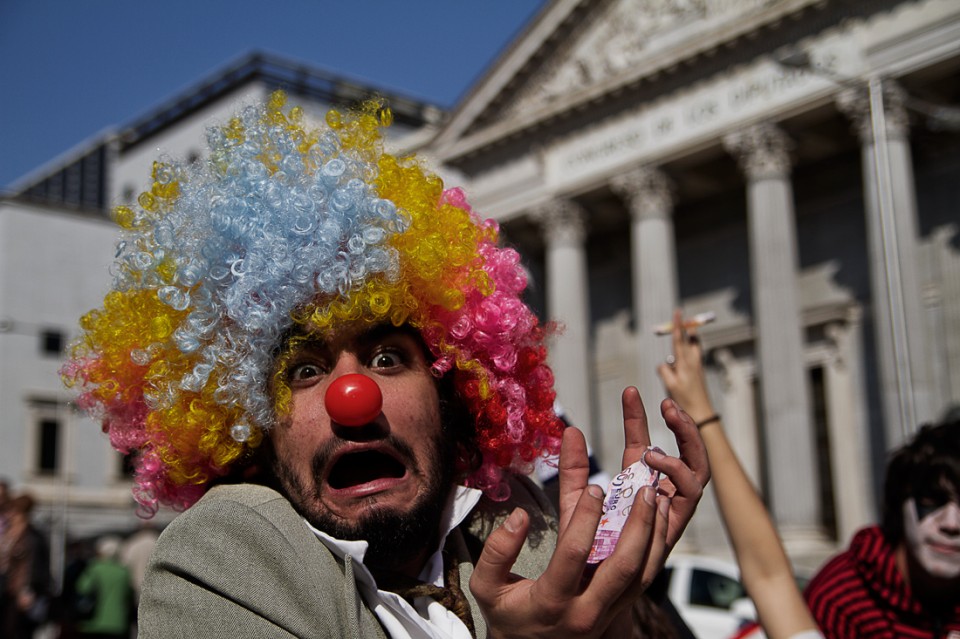 I won all this money selling art!!

So, how to find 10 people willing to be put in a tight spot?? Well, it always surprises me how people are so motivated to get involved in alternative activities, for this story I got in touch with a few circus groups, some of them didn’t take the proposal very well, but it was the guys from Circo Chaminade, http://circochaminade.com/, who went right for it after I showed them my previous work, this group had so much energy that I was difficult to follow their pace!!

Apart from the Chaminade bunch, my friends Jose, Elena and Alberto joined the show. 🙂 Wearing a proper clown make up and red noses like politicians ought to do. 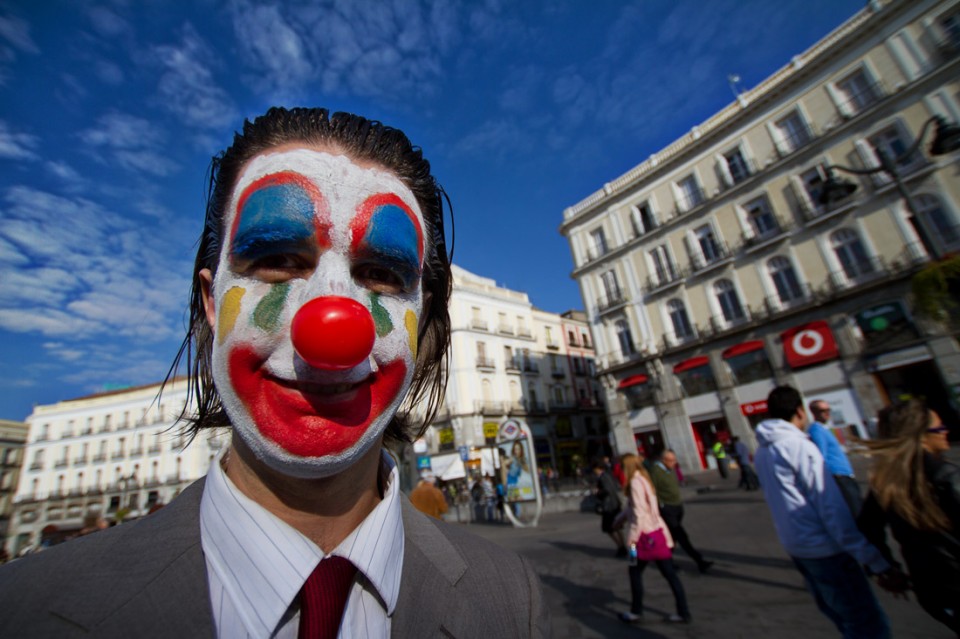 Jose Orenes preparing himself to became a proper politician.

As we got together without a specific plan, the wardrobe were a bit different between the actors, none of this mattered, as the attrezzo was simply great and gave the whole group a sense of cohesion.

Also I brought with me a lot of 500€, 100€ notes, I had been trying to print them in a few places, I found out that printers ( or operating systems) don’t allow you to print notes, some kind of safety measure for those who think that they can use a home printer to make your own money… 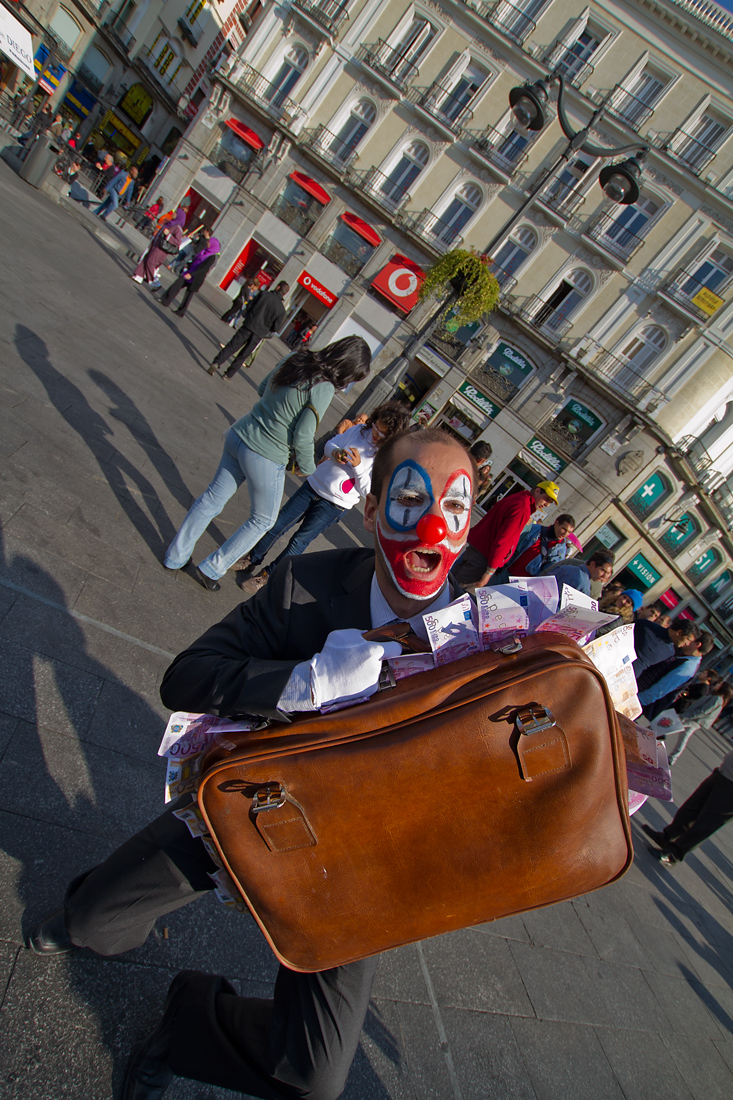 The day of the shoot, I got up very nervous, 10 people are a lot of people to direct… , we started preparing ourselves at my place, where we painted Jose, Elena and Alberto copying the same clown make up they had when they were just about 4 o 5 years old!

They put on their suits, grabbed a taxi and arrived at “Puerta del Sol”, where the guys from Chaminade were lying in the middle of the square, knackered after a hard night partying, but as soon and they saw as they got up completely motivated and ready to roll! 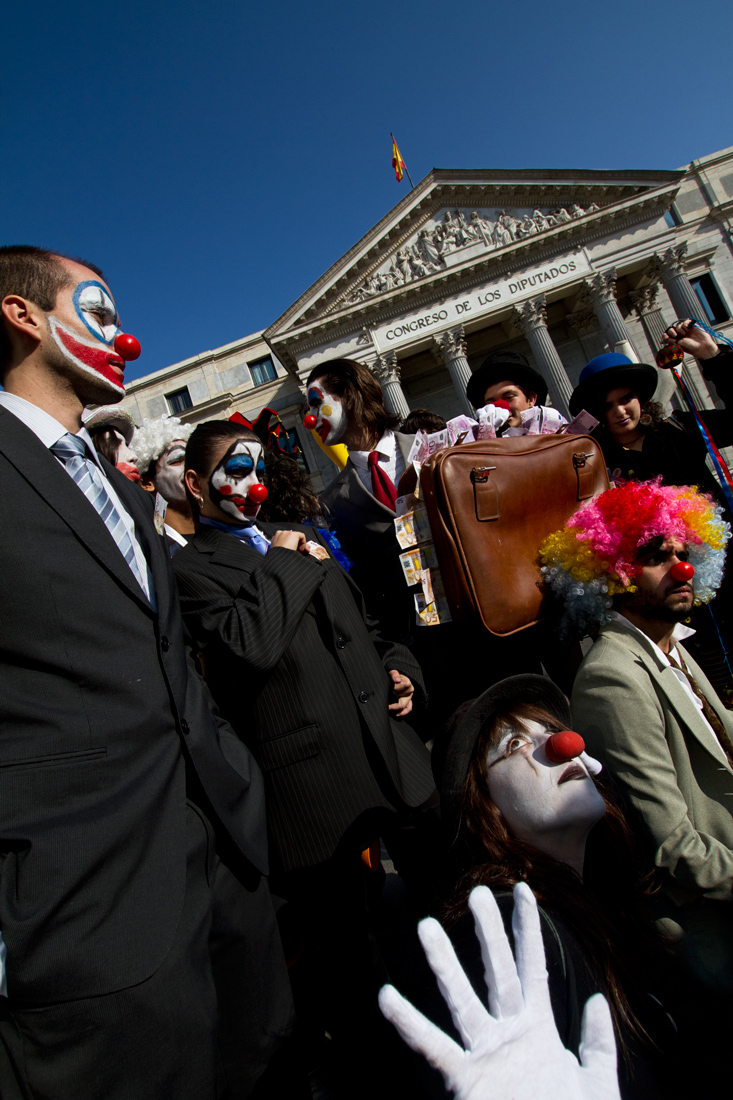 The members of the parlament.

There we were, right in the middle of Madrid, Sol square, some painting their faces, others adjusting their bowler hats,  their plastic nose and tightening the wheel of their mono-cycle.   In fact, a bunch of people started gathering around us thinking that we were going to perform some kind of show, which to be honest we did, actually a person asked my friend Jose if he could take a picture with him for 2 € ! He didn’t accept the money and posed with him as the artist he’s got inside. 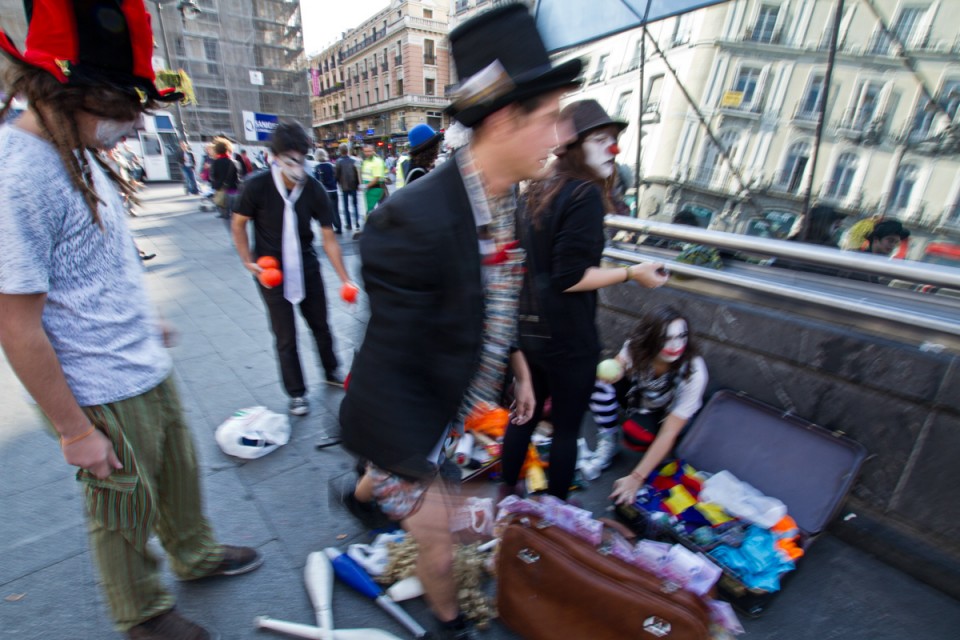 Chaminade getting ready for the photoshoot after a tough night partying.

Everything was ready for the shoot, so, after having a quick chat about the different scenes we began our walk to the Congress, I could feel the nerves coming from my stomach as we got closer to the Congress, we could see a few groups of policemen staring at us, and as soon as we started getting into position… zas!

Policeman: “You can’t take this kind of picture in here!” ,

Policeman: “I know, but you can’t take pictures because you are protesting!”

And right after he said that, for better or for worse a big group of tourists saw us and started taking pictures of us, as the policeman saw that we weren’t throwing any Molotov Cocktails or making any riots they relaxed and let us follow with our shoot. 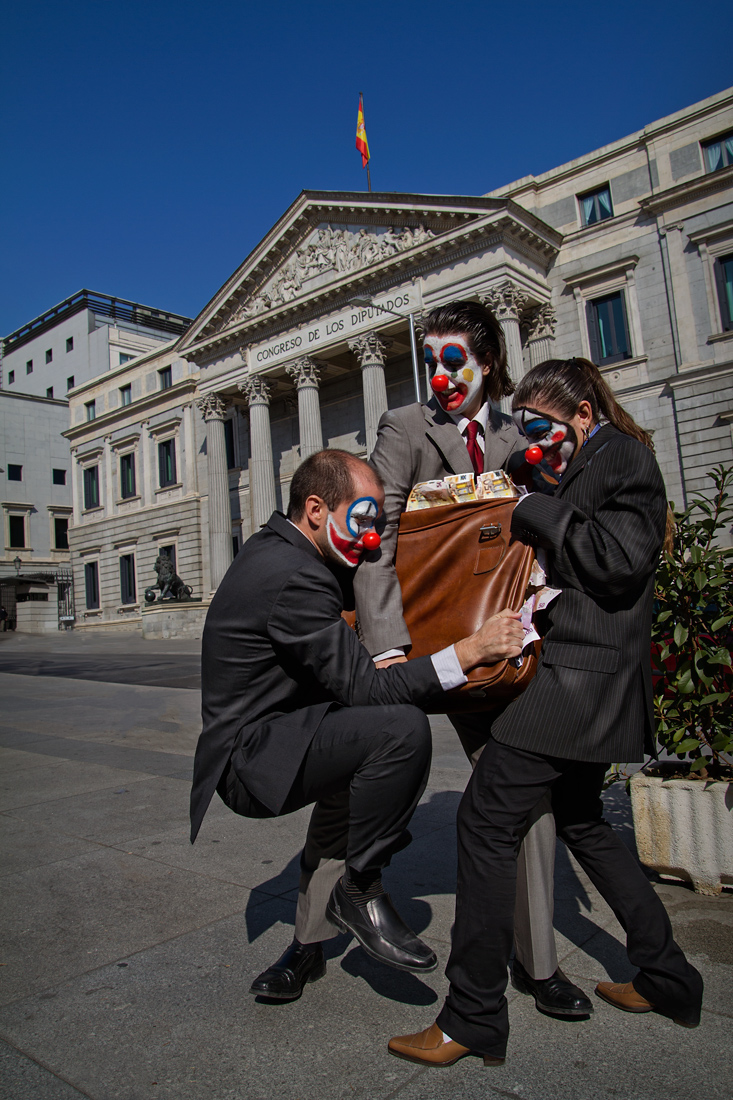 Everything got more relaxed and we spent 2 happy ours doing whatever we thought, throwing the attrezzo to the air, running in from of the policemen, etc. Over 600 pictures from which I would have to select just a few!

Fuck the world! We don’t give a shit!!

To finish the day we went to have a few beers in the area, wearing exactly the same clothes you see on the pictures, or as you see some of them not wearing even trousers! hehehe. 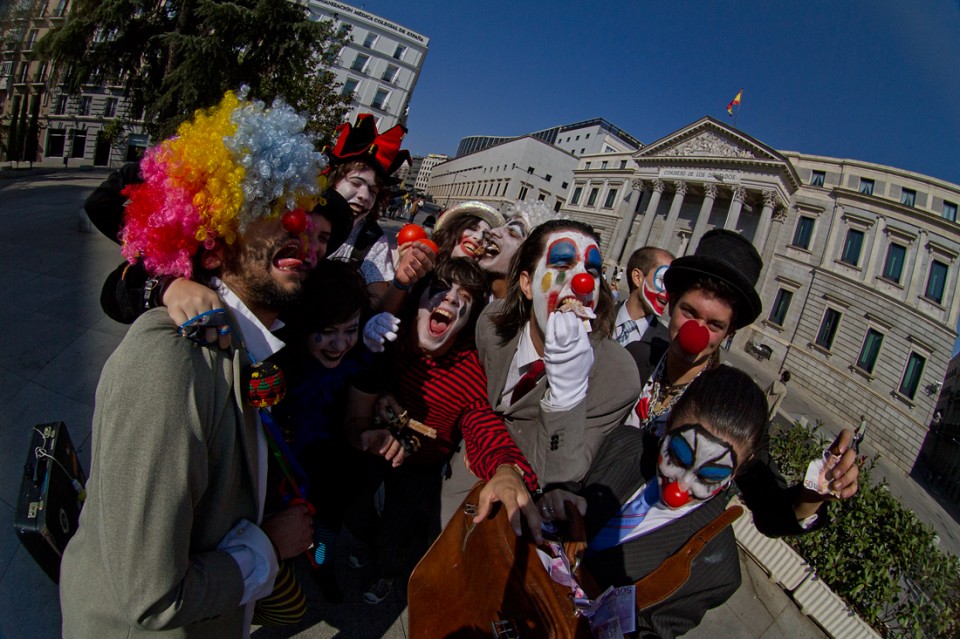 And that’s all folks! Cheers!!

“Unkown Reflections” is not finished, there will be changes, that may affect the style of …

One reflection of her many selves, trapped, she looks at the mirror contemplating what she …

The first month of the year is about to finish, and it looks like is …